Across the country, Wednesday, November 11 was the opening of National Signing Day for 2021’s graduating class of high school student-athletes signing letters of intent to their chosen colleges and universities. At Brewster, seven student-athletes signed letters of intent as part of a ceremony in the Smith Center for Athletics and Wellness. Brewster celebrated four basketball players and three lacrosse athletes who all committed to Division I colleges. Director of Athletics Matt Lawlor opened the ceremony praising the students for their accomplishments. “This is a special group who have achieved a milestone in both their academic and athletic careers,” he said. “However, knowing this group, they are going to continue to impress this year and at the next level. All of them are excellent student-athletes, but excellent citizens as well. I am proud to have the chance to work with them!”

For the first time in six years, Brewster has a Division I girls basketball player, as newcomer Tatiana Popa (Parkersburg, W.V.) signed her letter of intent to play at the University of Nebraska next year. Popa, a 6’5” post player, has the ability to score inside as well as from the perimeter and led Parkersburg to a state semifinal appearance last year. Second-year Head Coach Rebecca Brooks is excited to have her in the program for this season: “Tatiana has a lot of tools at both ends of the floor, and we are looking forward to getting her involved this season.” Popa chose Nebraska over Pepperdine, San Jose State, and Texas Tech.

On the boys side, Brewster recognized 6’7” swingman John Camden (Norristown, Penn.) who will sign this week with the University of Memphis. Camden, who has range well beyond the three-point arc, is home rehabbing an injury and chose Memphis over Indiana, Florida, Miami, and Penn State. Coach Jason Smith is excited about his return to campus in January. “John is an elite shooter who can space the floor for us this year. We are looking to see what he can do once he is healthy.”

Devin Carter (Miami, Fla.) is the reigning 7A Player of the Year from the state of Florida and an explosive 6’4” combo guard who is likely to do the bulk of the ball handling for the Bobcats this year. He had a slew of offers from Georgia, Georgia Tech, Virginia Commonwealth, and East Carolina, but chose to take his game to the Southeastern Conference and will suit up for the University of South Carolina next winter. “Devin is a great athlete and will be a big part of what we do at both ends of the floor,” noted Smith. “He can play on or off the ball, which will open things up for us during the season.”

The last player from Coach Smith’s program to sign today was Shane Dezione (Tobyhanna, Penn). Dezione ranked as one of the top 100 players in the country and is considered to be in the top 20 at his position. Dezione stands 6’2”, is incredibly athletic, and spent last year at Huntington Prep in West Virginia (Huntington Prep is considered, like Brewster, an elite basketball program.) Dezione entertained offers from Arizona State, Arkansas, Clemson, and Wake Forest, but chose to sign with the University of Arizona.

Along with the basketball signing success, Brewster boasts a strong lacrosse program that had three students sign letters of intent today. Post-graduate Braeden Pratt (Beverly, Mass.) was a two-sport standout at Beverly High School (football, lacrosse), and chose to continue his lacrosse playing career at St. John’s University. Pratt will be a defenseman for the Red Storm.  “Braeden is an incredibly hard worker,” noted Head Coach Jason Ouellet. “His work ethic, toughness, and athleticism will put him in a position to play immediately at the next level.”

Henry Blake (Ross, Calif.) arrived to Brewster for his sophomore year and has had an impressive prep career as a goalie. Blake had offers from multiple lacrosse powerhouses such as Rutgers, UMass-Amherst, Providence, and the University of Utah, but he chose to head to the Big-10 Conference and will play next year for The Ohio State University. “We are all very excited for Henry,” said Coach Ouellet. “He is a great athlete and does tons of things well in net for us.  Looking forward to having him for one more year and excited for his future.”

And the last signer of the day has been at Brewster since his freshman year, and has been a two-sport standout for the Bobcats. Brady Hoff (Ipswich, Mass.) has been an integral part of the Bobcat hockey and lacrosse programs during his time in Wolfeboro. Hoff, who had chances to play either sport at the next level, chose to go the lacrosse route and signed his letter of intent with the University of Massachusetts. “Brady is a true two-way lacrosse player,” noted Coach Ouellet. “He is very athletic and tough, and we are going to rely on him a ton this year—I know he can make an impact at the next level.” 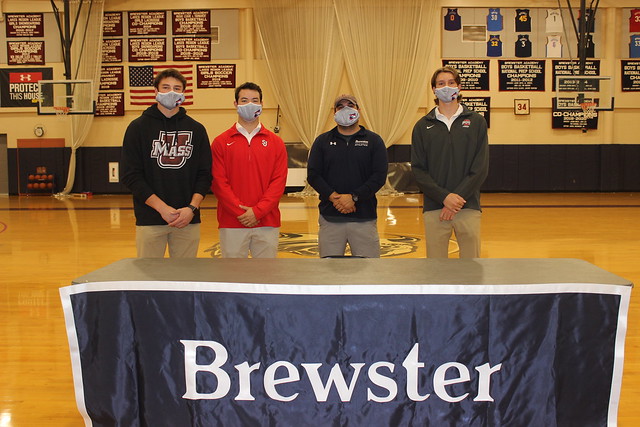 All News and Stories