I had spent the last 27 years teaching, dorm parenting, coaching, advising, and leading programs in service to kids in boarding schools when I arrived at Brewster in 2015. Given all I had experienced and learned about schools and my emerging vision for the future of boarding schools, I jumped at the opportunity to lead Brewster Academy.

What happens here at Brewster is transformative and is the way education should be.

Why? Students deserve to be understood and respected as individuals, celebrated for their unique talents, and challenged in a manner that is specific to each student. In this community, our decidedly student-centered approach is mediated by a team-based approach: students truly learn together—collaboratively—and are guided by teachers who educate collaboratively, as a well-coordinated, deeply focused team. It is through this powerful blend of individualized education and a team-based approach that such individual powerful transformation occurs.

Transformation is clearly manifested in so many ways: students develop deep and abiding understanding of themselves as learners; students come to understand the unique strengths and needs of others with whom they are working; students learn to collaborate with each other and with their team of teachers deeply effectively; and students come to value partnership to such a degree that they seek support reflexively from students and adults alike to challenge themselves through collaboration and not the relentless, isolating competition that characterizes so many elite educations.

When our graduates depart, they have an amazing sense of awareness that they didn’t arrive with. They have mastered the classroom content and they are armed with the skills that matter in life – curiosity, character, collaboration and confidence. They have a deepened commitment to others and they have the capacity to thrive broadly in college and beyond.

As we look ahead, we have a strategic vision that will relentlessly challenge us. We strive endlessly to be in yet better service to our students, our communities, and the broader world of education.

Come, visit, sit in on classes, talk to students and adults alike. Take in our unique, powerful approach to education. I believe you’ll see why Brewster is the way education should be. 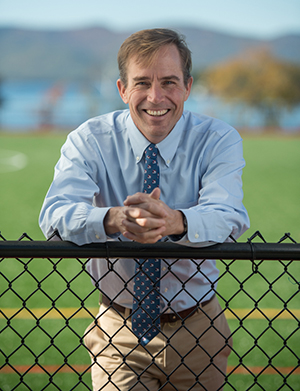 Recent Head Lines:
Into the Light
Double Bottom Line
A Life of Meaning
A Defining Moment

Dr. Craig N. Gemmell became Brewster Academy's 12th head of school on July 1, 2015. He came to Brewster after 20 years at the Groton School in Groton, Massachusetts.

An accomplished independent school leader, Dr. Gemmell is passionate about education and student centeredness. Over the past 26 years as an educator, he has built an impressive reputation for his innovative and collaborative approach. He has led strategic program initiatives, master-planning projects, alumni outreach efforts, and thoughtful governance and accreditation reviews while maintaining a close connection to students through teaching, coaching, and dorm parenting.

While at Groton, Dr. Gemmell served as the assistant head for program from 2012-2015 and from 2010-2015 was co-chair of the Groton STEM (Science, Technology, Engineering, and Math) Initiative. Other positions held at Groton include director of Program Development; director of College Counseling; and Global Services Intensive trip leader. Additionally, he taught science courses, served as a dorm parent, and coached cross-country running, crew, and recreational winter running.

Previously he was on the faculty at Loomis-Chaffee and Pomfret schools and served as an instructional assistant at Duke University while pursuing his master’s degree. He has completed coursework in literature at Middlebury College’s Bread Loaf School of English and in molecular biology and physics at Dartmouth College. As an undergraduate at Trinity College, Dr. Gemmell was an All-American athlete on the track and field team.

He and wife Nancy Hughes reside on campus in Lord House with their sons Teddy and Jobe. As a family they love skiing in the winter and spending time outdoors together in all seasons.